“Open the book to page ninety-nine and read, and the quality of the whole will be revealed to you.” –Ford Madox Ford 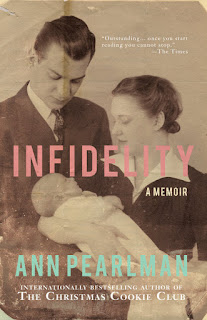 I applied the “Page 99 Test” to the new edition of Infidelity and reported the following:

Page 99 of Infidelity centers on ethnicity and race in an American family, which is a secondary theme of my memoir. Every family in the United States has an immigration story tied to ethnicity and race. My family of origin is multi religious and multi ethnic: Russian Jewish, German Christian. I fell in love with an African American man, Ty. On page 99, I introduce Ty to my parents.

It is 1962. Ty has finished his senior year as the captain of Iowa’s football team, and is visiting me in between professional football games. We are having dinner with my family at their home in a suburb of Pittsburgh. The page starts as I try to fight against the stereotypes that are so prevalent about African Americans:“His family is just the salt of the earth, hard-working, churchgoing, doing what you’re supposed to do kind of people.” My fork stabs a tomato and lettuce. “Ty’s the first one who’s gone to a university.”

“My brothers both have associates degrees from the community college.” Ty speaks of the importance of education to his father, his father who had to drop out of school in the eighth grade to help support his mother and because they couldn’t afford the books or shoes required if he were to attend high school.

We settle in for a guess-who-is-coming-to-dinner situation, way before the movie was produced.

An argument between my father and Ty develops as my father tries to stop or delay our marriage. He speaks from his liberal concern about our future and Ty argues from his position as the first person in his family to go to college and the first black captain of a Big Ten football team. He knows full well the possibility of being an outlier, while my father, the entrepreneur businessman, focuses on capturing the money lust of masses and plays the averages. The discussion reveals subtle aspects of implicit bias and vast differences in experience.

“I wonder how much you’ve really considered this. I mean, if you knew that most interracial couples regret it, would that make you reconsider?”

“Not necessarily,” Ty’s fingers cup the curves of the swan’s head on the arms of the chair, seemingly relaxed.

“I mean, if I showed you that ninety-five percent of interracial couples regret it after ten, twenty years, would that convince you?”

“I know how statistics can be manipulated.”

My father was right: there is no way of getting away from being Black, or Jewish or German or Anglo Saxon or any of all the myriad of colors and cultures that make us who we are. And so was Ty. An individual is able to break away from the bell curve. There have been epochs of increasing inclusion and growing civil rights. The memoir ends in the mid nineties. Long before the swing of the 21st century between an election of a biracial president and Americans marching with swastikas in our streets. When the conversation on page 99 took place, racial divisions seemed they could be resolved. But as our present turmoil exposes, racism and inequality continue to plague our country.

This blog first appeared in September 2108 on the official blog of The Campaign for the American Reader, an independent initiative to encourage more readers to read more books.

Marshal Zeringue  added this about the book: “Ann Pearlman has won vast critical and commercial success for her fiction and nonfiction books. Keep the Home Fires Burning: How to Have an Affair With Your Spouse garnered the attention of the Oprah Winfrey Show and was featured on many other talk shows. Her memoir, Infidelity, was nominated for National Book Award and a Pulitzer Prize, and made into a Lifetime movie by Lionsgate. Inside the Crips, with a foreword by Ice T, took readers into the life of a Crip gang member and the California Prison system. Her first novel, The Christmas Cookie Club, became an international bestseller, spawning cookie exchanges and a follow-up cookbook. A Gift for My Sister won first place in the Sharp Writ Book Awards, 2013. She lives in Ann Arbor, MI.

Thank you for letting me appear on your blog and also for encouraging more reading.